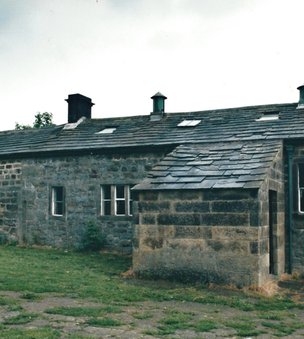 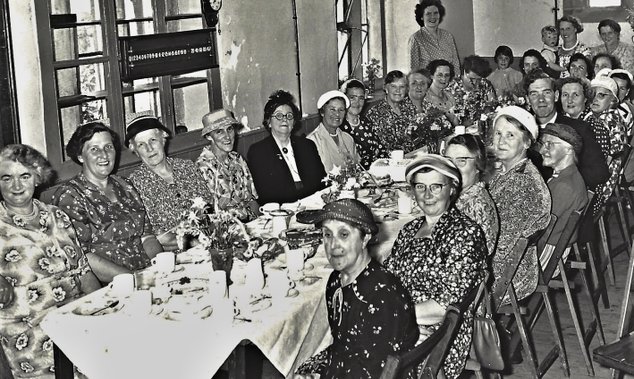 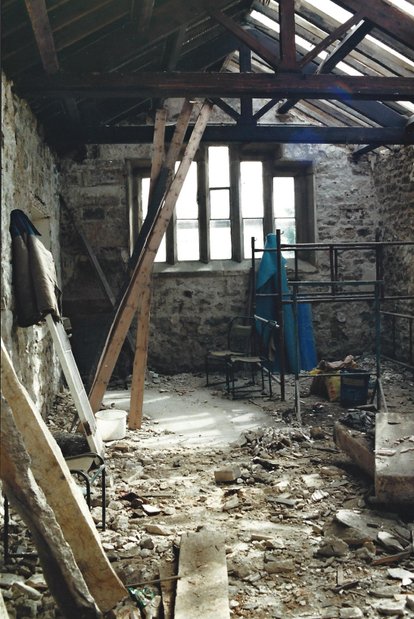 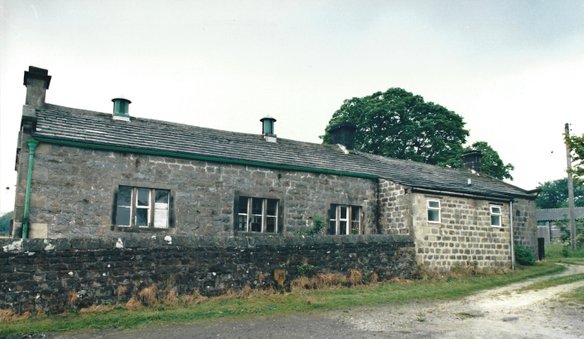 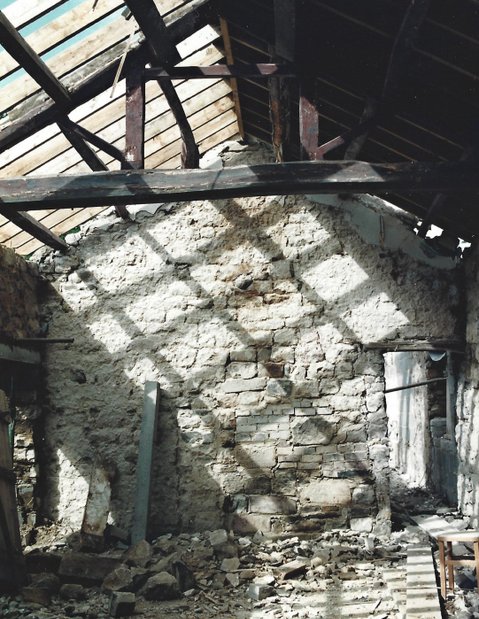 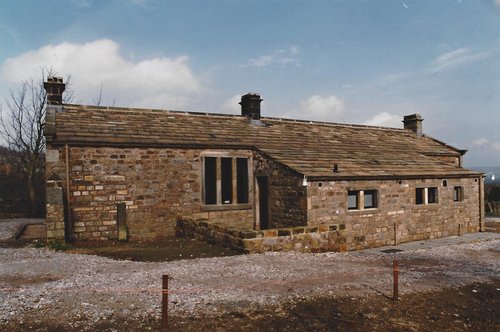 Above: the building was thoroughly gutted and renovated in the early 1990s work.

Left: After the renovation. Externally the results of the work are very clear (compare with the 1960s photo above).

A "new" roof which does not sag any more, a small extension to the original building on the car-park side of the building, the ventilators removed, a rear door filled in, and the windows now much more in keeping with the style of the place.

Left: a 1950s shot of a Mother's Union afternoon tea at the Hall. The Vicar is seated in the middle of the row nearest the camera.

Above: the ex-school during the 1960s - looking a bit the worse for wear and still sporting its early twentieth century ventilators. But the Trustees had added a small extension to one side. The "sheds" at the rear of the building can clearly be seen here.

But James Howroyd was not the final benefactor who helped save HMH for us to enjoy. The Trust’s problem was that it no longer had any land or investments from which to gain annual income and its existence depended on the goodwill and generosity of local people. As is quite usual in those circumstances such generosity – although always gratefully received – was never enough and, over the next twenty or thirty years, the Hall deteriorated again until it became very clear that something very significant had to be done.

The indications are that that "something" began in 1989 when, on September 14th,  the building was registered as a Charity (no. 701972). The Trustees must have been behind these moves and we know that the rescue of the Hall in the early 1990s was organised by Mr Bryan Scholes (*). He was instrumental in organising finance of around £50,000 from a combination of Harrogate Borough Council, the Yorkshire Rural Community Council, and quite substantial local gifts and covenants.

With this money the Hall was thoroughly renovated once more and local people continued to give of their time and energy to keep it going as a community resource.

But, the problem with lovely old buildings like HMH is not so much the occasional rescue bid and the ensuing renovations – costly as they are - it is the financing of the building’s regular upkeep through Dales winter after Dales winter, when the rain, wind, frost, and snow compete in eroding pointing and brickwork and in expanding any tiny gaps in the window frames, not to mention their effect on exterior paintwork.

Even though Francis Day’s Hookstone School had finally closed its doors, the Trustees continued to do their best to look after the building. In 1952 they replaced a sink and smoke pipe, and a large ventilator, repaired a cupboard, and kept the building heated (that year they paid Fred Brown a total of just over £5 for coal). With their interest income now exceeding outgoings they were able to buy another £150 of Deferred Bonds (October 1952).

The hire of the building was set at 10 shillings per night (about £15-£20 in 2015 cash). At the end of January that year, for example, it was hired out to the Thornthwaite Mothers’ Union for a Whist Drive – for the aforesaid 10s.

The account books continue to show the “school” gaining income and maintaining itself. In 1954 they finally took the decision to get rid of the “forms” – the benches on which the school-children had seated themselves for decades. The cast iron frames for those forms were sold for £2 (about £50 today).

And in that same year the Trustees were able to buy another £150 worth of Bonds.

Quite apart from its evening rentals the building was also being used for billiards by 1955. On the 21st April of that year the Trustees paid Willie Smith and George Nelson Ltd., £2/10/0d for three lights and their fitting for the billiard table. New lighting was also installed throughout the building – at a cost of £45 (about £1,122 today). The new lighting included a wall light to illuminate the darts board.

The final entries in the account books are for November 1957. By this time (by Government order in 1957) it was under the Governorship of the Ripon Diocese.

For some reason the money from the investments which had kept the building sound for so long seemed, at that point in time, to dry up.

Local people who attended the school say that the building began to deteriorate during the 1960s due to a lack of maintenance funds. It was certainly used by local people but it gradually descended into a parlous state. So much so that it took another generous benefactor – Dr James Howroyd – to save it again - this time in 1967.

In that year Dr Howroyd organised the purchase of the building from the Ripon Diocese for the sum of £250. It isn’t clear how much of the purchase price was donated by Dr Howroyd (possibly all of it) but it was probably equivalent to about £4,000 in 2015 money.

The Deed of Sale – dated March 20th 1967 – was between the Ripon Diocesan Board of Finance and a new Board of Trustees comprising:

The new Trust, which still exists, has to be administered under that 1967 Deed. The Trust's title is the  “Dr Howroyd Memorial Hall Hookstone”.

Dr Howroyd is an interesting benefactor. You can see his picture in the Hall (it was donated by Alex Houseman whose wife is a member of the Howroyd family). He probably lived in Leeds in his younger days (he was listed on the 1913 medical register as then living at 98, Woodhouse Lane, Leeds) but he lived locally in later life. He might have been in his eighties when he bought the Hall for the community. We know also that he was an army medic during the Boer War and possibly the First World War.