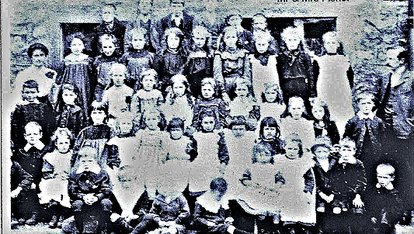 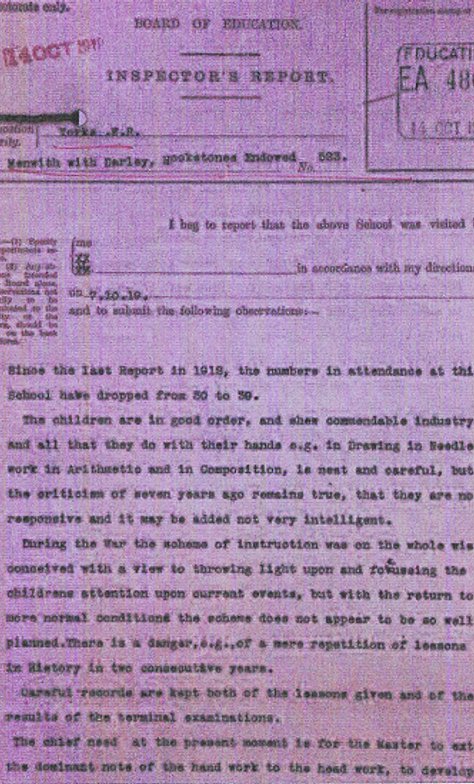 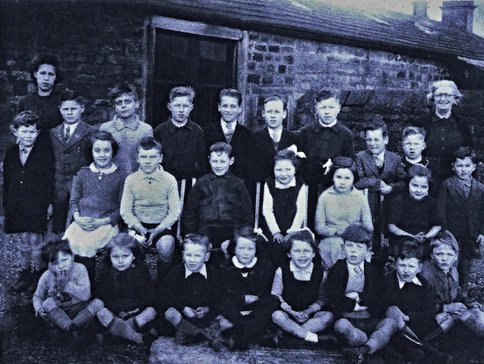 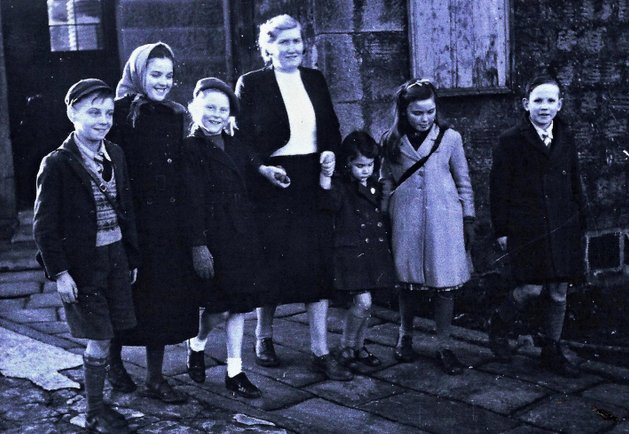 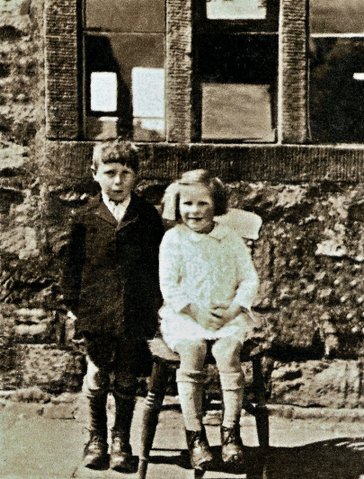 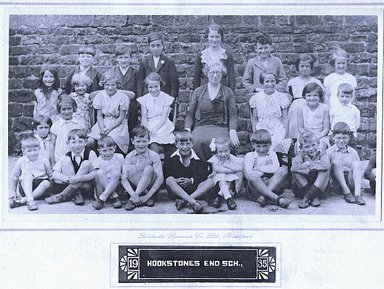 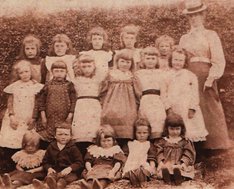 Left: a school photograph from 1925. The teachers could be Mr Dyson and Mrs Pulford. Certainly the latter lady looks like Mrs Pulford, but the male teacher could be either Mr Fisher or Mr Dyson.

Some children may not have been present on that lovely sunny day but there appear to be only 28 pupils - well below the 50 of 1912.

Above: 1935 school photograph of Mrs Pulford and an assistant for "Hookstone's End School".

Left: Final day - December 1951 - Miss Bryant and a villager watch the vicar as he speaks to the six "final" children

Above: 1940s school photograph of Mrs Pulford and an assistant with 24 pupils.

Right: a pair of pupils probably from about the same era - 1940s.

Above: Final day - December 1951 - Miss Bryant leads six of her last pupils out of the school for a newspaper photograph. Alex Houseman is pictured on the far right.

The newspapers covered it and took photos - which unfortunately are too grainy to be shown on this site. They showed a class being taught by Miss Bryan and a game of cricket in the courtyard.

The article credits Dr Howroyd and Mr John Houseman as being the surviving scholars from a photo taken in about 1886.

There was another survivor however - Mary Houseman - pupil and later Assistant Teacher - was still living in Pateley Bridge under her married name Mary Atkinson.

Above: a school photograph of Miss Mary Houseman assistant teacher with a group of the younger children as listed below.

Mary Houseman became Mrs Atkinson - of whom you will read more below.

For whatever reasons, and in spite of having what appears to have been a pretty solid case, the Council backed down and allowed the school to remain open.

The 1935 school photo with Mrs Pulford as Head Teacher and an assistant – shows 24 children still attending (but the magic figure for the Council was clearly 30+). Interestingly – and such a title must have been approved by Mrs Pulford – the school is called “Hookstones End School”.

Thanks to Alex Houseman (to whom we owe almost all of these illustrations and facts), we can put some names to most of the faces looking out at us from  eighty years ago (see list below photo).

Mrs Pulford was still one of the school’s teachers in 1947 but her salary had “increased” to just over £172 per year (but, due to inflation, it was still only worth about £6,400 in today’s terms). She also had an Assistant Teacher called Ethel Pullen.

In September 1948 Mrs Pulford was joined by Miss M Bryan whose salary appears to have been just under £21 per month (£252 per year – almost £9,000 in 2015 terms). It seemed as though Mrs Pulford was retiring and Miss Bryan was taking over.

An interesting financial picture – one of management on a very limited budget – can be drawn from the 1949 audit which showed investments and income consisting of:

On October 7th 1919 one of His Majesty's Inspectors of Schools came calling. According to his report the school was last inspected in 1912. The report was a bit of a curate's egg. Pupil numbers had dropped over that seven year period from 50 to 39 but the children were said to be "in good order" and showing "commendable industry". However, the inspector repeated the criticism he says was made in 1912, that the children were "not responsive" and that they were "not very intelligent".

Interestingly the Inspector went on to suggest that "a less formal atmosphere might be found to encourage the children to overcome their shyness". His report ends with a suggestion that the Trustees might consider the addition of a carpenter's bench and some tools, a school library, and some pictures.

Above: the first page of the 1919 Inspector's Report on Hookstone's Endowed School

Left: a 1905 school photograph - teachers at either end of the shot may be Mr & Mrs Fisher

That’s about £191 per year in income from investments – about £6,200 in modern cash – plus charitable income of about £56 from the Isobel Day Trust and a further £13 from United Charities.

The problem is that we do not know how much of the costs of the school were being paid for by the local council and what contributions the Trust had to make. That total of £260 income for the Trust might have been very good but, if any significant proportion of Miss Bryan’s salary of well over £200 was to come from the Trust, then the amount may not have been sufficient. Even in the early 1930s the school was costing well over £500 per year.

In 1950 the Trustees had to raise £196 by selling some stock. Clearly costs were rising and income was limited. In November of that year J Wrigglesworth repaired the school’s roof for the sum of £18/10/9d.

Perhaps inevitably, in the next year it all came to an end. Post-war Governments had looked in depth at the education system and, in the interests of establishing free national schooling, economies had to be found. These generally took the form of combining small primary schools. Some were closed down and others – usually more geographically accessible – were expanded.

But only two and a half years later, on December 20th 1951 Hookstone School closed.

The decision to close was almost certainly somewhat rushed because it was not possible to give Miss M Bryan her contractual notice of three months. Perhaps the Education authority feared another petition). Whatever the reasoning, her letter of notice was only issued on November 17th 1951.

The school trustees managed to bank just under £400 that year but spent £484 – so the Trustees sold another £150 of Consols (for a total of about £147 including interest).

Some of the children appear to have been transferred to Dacre Braithwaite School and some to Darley.

With the advent of local authority run education and the fact that we have no census data after 1911 (it’s restricted until 100 years after the census) the names of teachers who might have been in charge of Hookstone School become a matter of luck and memory, but the School continued to operate into the 1950s and survived an attempt to close it in the 1930s.

Thomas Mercer Fisher (39) may well still have been the Master in 1911 – he was then living with his wife – a Scots lady by the name of Isobel Charles Fisher – at “Fogfields House, Darley” (this was probably what today is the listed house called Fogfield House on Low Lane). Mrs Fisher was also a teacher although we do not have any evidence that she was teaching at Hookstone it is probable that she was the Assistant. Also in residence was a young servant girl by the name of Katherine Houseman – she was just 17.

Although census information disappears in the twentieth century after 1911 (or at least until the next ones are released), we are lucky in that Alex Houseman has a number of the school Account Books dating back to the very last years of the 19th century from which almost all of what we know about this century has been gleaned. Those books not only give us a wonderful insight into how the school was financed and run but also who the teachers were and even how artistic the keepers of the books were (almost certainly the local clergymen).

The schoolroom still bears a plaque which names the men from the area who gave their lives during World War I – there’s more to be said on this in the attached page on Thornthwaite WWI.

In the first fifty years of the twentieth century – those during which Hookstone School operated as a school - the names of five of the teachers and assistants are known – Mr Fisher, Mrs Fisher, Mrs Pulford, Miss or Mrs Freda Parker, and Miss Bryan – they are almost certainly not the only ones, there will have been others and assistants as well. Miss Bryan, we know, was the head teacher for about six years before the school closed, and – according to those who knew her - she was a strict disciplinarian (but then all teachers in those days were strict).

Income from rents was put to good use during the 20th century. Whatever was not immediately required for the running of the school and the salaries of its teachers was invested. By the advent of World War I the school trust had accumulated some £591/15/10 in the bank (that’s 591 pounds, 15 shillings and 10 old pence - roughly equivalent to around £60,000 today).

When the Government of the day (under Prime Minister H H Asquith) asked for help in the form of loans to help pay for the war, the Trust did its patriotic duty by lending the Government just over £526 in the form of purchases of War Bonds. In 1917 another £200 was invested in War Bonds, and, by the end of the war in 1918, the Trust was getting around £36 per year in interest on those Bonds. Compare that with the rent the Trust was then receiving from one of its properties: Ivy House Farm was bringing in £34 per year in rent.

The Trust (and we must remember that this was separate to the Council funding of the school) was clearly being actively managed. In 1931 the Trustees sold off Ivy House Farm and a separate cottage for a combined £1,390 (about £80,000) and they then used that money plus the accumulated War Bonds to acquire £4,000 worth of Consolidated Stock – called Consols for short.

Around that time an A. Dyson and Mrs Pulford were the school’s teachers. Dyson received £2/8/0 per week and Mrs D M Pulford was paid the princely sum of £2 per week – just over £100 per year or about £6,400 in modern money.

The account books show that it was during the 1930s that the school was at its peak in terms of investment income and expenditure, but almost certainly not in terms of the numbers of youngsters attending. In November 1932 the Council wrote to the Governors telling them that it had decided to close the school as being “unnecessary”. It justified this decision in some detail, explaining that it predicted savings of around £289 per year on 1931-32 expenditure of £519 for the school.

The Managers of the school argued the case; saying that the current teachers would soon be retiring and that less expensive new teachers would cost a lot less – the Council thought the cost would be around £300 but that this would rise by the normal annual increments.

Most of the dispute centred on the numbers of children attending the school. The Council said that the average attendances had dropped from 35 in 1929 to 28 in 1931 and that the average for 1932 was likely to be 24.

Although the Managers argued that there were a number of babies and newly marrieds in the area, the Council argued that the potential pupils would be no more than 11 and that these new entrants would, anyway, be spread over the years to 1937 and would not replace the older pupils leaving the school.

The locals are said to have fought hard to keep the school open – a petition was sent in with twelve signatures and the vicar, the Reverend G H Elliott wrote a detailed letter to the Council in January 1933. This appeared to  suggest that some of the costs of the school could be met by the charity. He also argued that there would be 22 children in the area coming of school age in the next eighteen months.