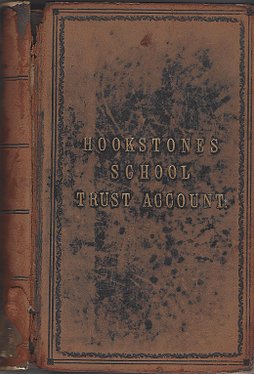 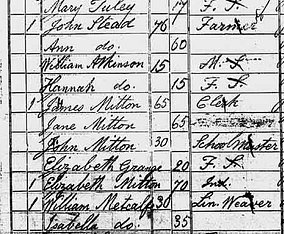 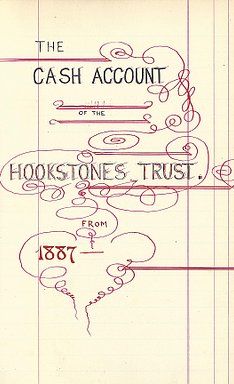 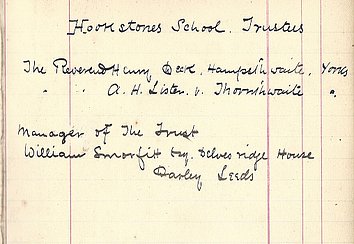 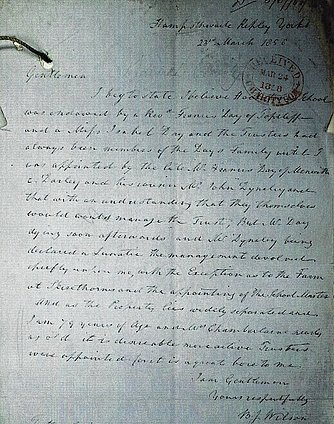 In 1887 the school initiated a new accounts book. Unlike previous books this one has survived and is pictured here.

An artistic Trustee - most probably one of the the Vicars - drew a cheerful front page for it.

The letter pictured on the left is an interesting document from the year 1858.

It was written by someone who was probably the Vicar of Hampsthwaite - a chap called B J Wilson - on 23rd March of that year. It was received by the Charity Commission in London the very next day (good postal system).

The Reverend Wilson explains that the Trust (he believes) was originally set up by Dr Francis Day of Topcliffe. He himself was appointed a Trustee by Mr W. Francis Day of Menwith and his cousin Mr John Dyneley on the understanding that they would manage the Trust.

However, "W. Day dying soon afterwards and Mr Dyneley being declared a lunatic, the management devolved chiefly upon me with the exception of the Farm at Skirethorns and the appointment of the School Master."

The Rev. Wilson went on the say that the Trust's properties were widely separated and that he was 79 years old. A Mrs Chamberlaine (presumably another Trustee) being almost as old.

He concluded with a heartful plea:

"... it is desirable more active Trustees were appointed for it is a great bore to me".

The early Trustees must have been dutiful for “Hookstone’s  School” survived into the next century and continued to educate the poor of its parishes.

There may be documents yet to be unearthed which shed light on that first one hundred years but at present the next time we get a glimpse of the school is when the 1841 census was completed. There had been other censuses in the preceding decades but, tragically, only the numbers were kept. All the detail about who lived where was destroyed.

Almost a century after its foundation, the census of 1841, reveals that the Master of the school was probably a chap called John Mitton (he was the only schoolmaster listed in the area at that time). He was then 36 years old and was lodging with what were presumably relations, James and Jane Mitton. James was a clergyman and may well have been the Vicar at St Saviour’s given what we know about where John Mitton lived in later life.

We have no way of knowing when John Mitton started at the school but he was still the schoolmaster at Thornthwaite thirty years later – in 1871 – when he was 66 years of age.

We don't know whether John Mitton was still there in 1872 when “Hookstone Church of England School”  was inspected.

Provision was estimated at 1 in 5 of the population – so therefore roughly 50 children would have been eligible to attend.

We know that, in 1871, Thornthwaite with Padside had 272 inhabitants and a rateable value of £1581.12s.0d from 76 ratepayers. The number of children requiring an elementary education would therefore have been 54.

Apparently – according to the Inspection Report – 20 of the children at the school were from Braithwaite (a nearby hamlet).

By the 1881 census, however, John Mitton had definitely retired, for a 32 year old man named Robert Stephens appears to have been the schoolmaster. He was then lodging at Leeming Stile, very near to the school. Leeming Stile was described in the census as a small farm of just seven acres, run by Sarah Steele, a 62 year old widow.

Mr Stephens lasted less than ten years because, by 1891, the school master was probably the 26 year old  Matthew Strickson who was living at Folly Gill (as it was spelled then).

He, in turn, also moved on within a few years (there’s evidence that he moved as a teacher to Leeds). By 1901 Strickson had been replaced by a Thomas Fisher who was 29.

There were two interesting developments in that year at the very beginning of the twentieth century. Firstly, Mr Fisher was married – so we might believe that the Trustees had changed the rules about the school teacher being single. Secondly, by that year, the school had a female Assistant Teacher in the form of the 21 year old, Mary H Houseman, who was then living at Red Syke.

Women had been active in the teaching profession for a long time – probably around 50 years – but usually as assistants. It was to be a few years more before Thornthwaite got its first female Head Teacher.